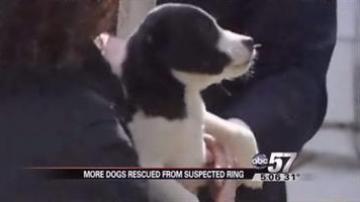 FLINT, Mich. -- In Flint more dogs have been rescued.

On Tuesday ABC57 News reported about a 14-year-old suspected to be behind a massive dog fighting ring.

Thursday seven more dogs were found, including two puppies. They were rescued from the boy's grandmother's house. Sheriff's deputies aren't sure if they've recovered all of the dogs.

"One of the dogs that we brought out appeared to be nursing and our first impulse is to believe that they may be breeding these dogs,” said Genesee County Sheriff Robert Pickell.

The sheriff says the teen was running the ring in a garage behind his mother’s home. His mother was arrested on unrelated warrants.