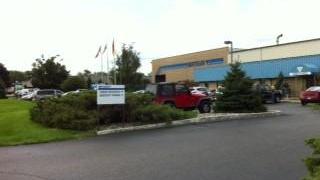 GOSHEN, Ind. -- More than 24 people were hospitalized on Friday afternoon following some type of chemical odor at Benteler Automotive in Goshen on Eisenhower St.

Firefighters described the chemical fumes as a byproduct of Benteler's manufacturing and or a strong odor from the subcontractor's tanker when he was pumping the byproduct out of the Goshen factory. Whatever the case was, a strong fume made it hard for several people to breathe and caused some of them chest pain, while others became faint.

Jim Ramer, the Goshen Assistant Fire Chief said the west winds blew directly east into Flair Interiors across the street and 8 employees inside that plant also became ill as well.

Goshen firefighters and EMS brought in as many ambulances as they could but had to call for mutual aid from the New Paris fire department to help them out.

Firefighters determined the fumes did not pose a serious health risk and those who had trouble breathing have been treated and released.

"I caught asthma, I felt dizzy and I was nauseated, and caught a bad headache, and the nausea in my stomach made me really upset," said Julio Lopez who works at Flair Interiors. He says he was rushed to Goshen Hospital by ambulance and once at the hospital he said he was hooked up to a breathing machine and given two treatments. Lopez is an asthmatic and first tried his inhaler that he carries with him, but said the medical wasn't helping. He said the hospital paperwork orders him to remain off the clock for at least three full days.

The fumes caused a lot of confusion. "They sent us out the first time (around 8:30am), they said it was like a gas leak or something, but we weren't sure where it was coming from," said Benteler employee Daniel Franco.

The fire department quickly measured the air and determined it wasn't a gas leak, but they needed so much help to transport patients to the hospital they had to call New Paris for mutual aid.

At this point Assistant Chief Ramer believes a subcontractor with Advanced Waste Services who was pumping out Benteler's byproduct from making auto parts is to blame. A better term for the byproducts Ramer said is sludge. He said the driver of the truck told investigators the truck's tank was recently cleaned out with some nontoxic chemicals. Ramer said he believed those chemicals were likely the culprit that gave off the bad odor.

Ramer said, "and he (the subcontractor) thinks as he started the pumping process the odors were released to the atmosphere."

Franco said, "I did feel lightheaded, nut they said it wasn't toxic so I wasn't too worried about it."

Toxic or not Lopez said he would like to know what exactly those chemicals are that made him sick."It would be good to know, so I know what I'm dealing with", he said.

ABC 57 called the subcontracting company that is located out of Portage, IN. An employee with Advanced Waste Services said no chemicals are used to wash out the inside of the tanker, the process is done with high pressured water, he felt it was highly unlikely the fumes came from his company's empty tanker truck.

Both the employee of Advanced Waste Services and a managerial Benteler employee who did not want to be identified said there has never been an occurrence like this before with a byproduct removal at the Goshen factory before today.

A public relations spokesperson for Benteler did not return phone calls made by ABC 57 News.