Most ambulances will not use lights and sirens in Berrien County 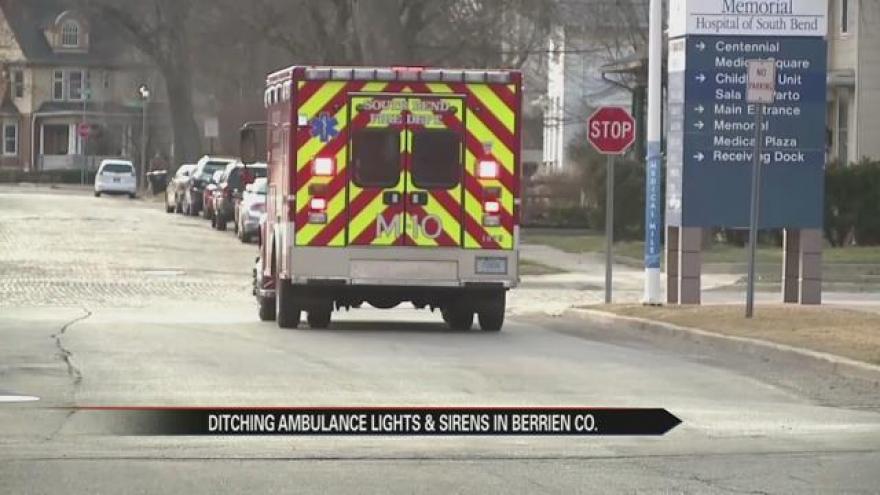 We all know the drill when you see an ambulance and hear the sirens you pull over.

But in Berrien County you might not have to as often.

That’s because most ambulances will no longer use lights and sirens even in emergency situations.

It is a shocking statistic from the National Highway Traffic Safety Administration.

However, not one accident involving an ambulance has been reported within Berrien County.

Still the county’s medical control is taking what it considers appropriate action.

Effective immediately the county is drastically reducing an ambulance’s use of lights and sirens.

That means ambulances will stop at stop signs and red lights, just like any other driver on the road.

Only 20% of calls, they said, warrant an emergency response with lights and sirens.

“It’s fairly limited. It would be things like cardiac arrest, people who have stopped breathing, significant shootings, or certain types of people trapped in certain types of car accidents,” said Beyer.

Calls of abdominal pain and broken limbs, for example, would not receive a lights and sirens response.

There are just a few exceptions.

“If they reach the scene and they feel like they have to use them to get to the hospital we’re going to still allow that. If there’s a line of stopped traffic and they need to slowly go around the side that’s okay too,” explained Mary Ann Pater with the Berrien County Medical Authority.

Officials said their research has not proven the additional drive time will impact a patient’s outcome.

Earlier this week residents told ABC57 News they disagreed with this protocol.