Most charges dropped in Zumba case 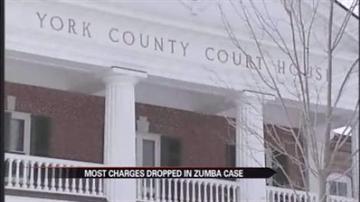 MAINE -- The Zumba prostitution case out of Maine has come to a halt.

On Friday, a judge dismissed most of the charges against one of the defendants, Mark Strong. That prompted an appeal, and stopped the progression of the case until Maine's highest court can make a ruling.

46 of the 59 charges were dropped against the businessman.

The charges were originally filed because prosecutors say the alleged prostitution clients were videotaped without their knowledge.

"It's clear that those were not charges that made any sense," said Dan Lilley, defense attorney. "There's no state law that protects people, gives them privacy, when they're committing crimes."

The remaining thirteen charges of "promotion of prostitution" and "conspiracy to promote prostitution" are still ongoing for now. Strong said he just wants to move on.