Most students want Coach Kelly to stay at Notre Dame 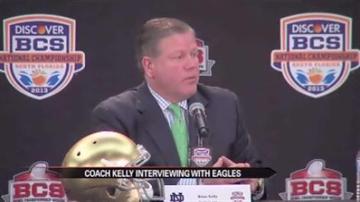 SOUTH BEND, Ind. -- With reports that Notre Dame’s Head Football Coach Brian Kelly was interviewed for the Philadelphia Eagles’ coaching position, fans, students and alumni are wondering whether he will stay or go.

Students had mixed opinions about Kelly’s future, but most said they want Coach Kelly to stay.

"I was pretty shocked, I thought he would kind of be in for the long haul after this,” said student Michael Ashley.

"I could understand it, I mean which coach wouldn't be thrilled about going off to the NFL?” said student Mark Solorio.

"He still has more to do. The National Championship didn't go as well as it probably could have but he's shown that he can succeed here and he can make a team even better in the future,” said student Robin Sturgeon.

The success sturgeon describes coupled with an open head coaching position in the NFL has set up the perfect opportunity for Kelly to leverage his worth when he meets with Athletic Director Jack Swarbrick.

"I just had a class with Jack Swarbrick. He said the coaches get paid market value, it's what they're worth. So I guess he'll get paid, if he's worth more then he'll get paid more,” said Sturgeon.

"It's capitalism at its finest, I suppose,” said Ashley.

But money can't buy you everything and trust is a lot harder to earn than greenbacks.

"Even hearing about this, suddenly his popularity has taken a hit,” said Ashley.

Despite Kelly's track record of jumping ship to bigger and better opportunities, students are holding out hope Notre Dame has somehow changed him.

"If he chose to stick around he could be a legend around here,” said Ashley.

We tried to speak with representatives from the university about a possible replacement for Kelly.

Spokesman John Heisler said that would be up to Athletic Director Jack Swarbrick to answer and he is out of town.