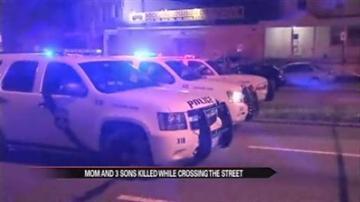 PHILADELPHIA — A mother and her three sons were killed as they were crossing a street in Philadelphia.

Police say a 27-year-old mom and her 1-year-old son died at the scene when they were hit by a car speeding down the street.

Her 4-year-old and 9-month-old died later at the hospital.

Police think the driver was racing another car.

"At this time we're not sure," said chief inspector Scott Small.

A fourth son remains in the hospital. He is in critical condition.