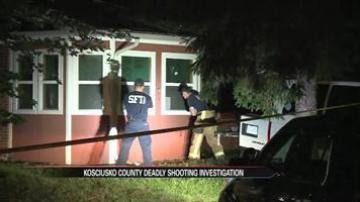 CROMWELL, Ind. – One man is dead and two others are recovering in separate hospitals after a shootout Monday night.

But 56-year-old Gary Helman is no stranger to Kosiusko County Police.

In 2009, police shot Helman twice following a seven hour standoff while serving a warrant, and records show Helman reached for his handgun during that incident.

Flash forward to present-day, Kosciusko County Sheriff Chad Hill says this shooting is one of the most unusual cases he has investigated in 24 years.

“The current warrant that the bounty hunter was attempting to serve was a failure to appear from Kosciusko County.  He had the original two warrants that were resisting law enforcement and also a battery that resulted in serious bodily injury were the original charges where he had skipped bond.  So that’s when the bounty hunters were involved in retrieving him at that point.”

Helman’s mother Ada was in the home during the time of the shooting Monday and says the most nightmarish moment of the evening was seeing her son’s limp body in a pool of blood on the floor.

Recovery agents saw Gary on the front porch when an exchange went on between the men, according to Ada.

A gun fight soon started, then the bounty hunters allegedly shot through her back door and entered her home.

According to police, bounty hunters came armed for Gary Helman after he missed a court date.
Allegdly, Helman was also armed.

Bullets flew in a gun battle that would ultimately kill Helmanand  wound two others including Helman's twin brother, Larry, who was caught in the cross fire.

"I have one son left and a daughter. They have killed my family, they have left my husband to die at the hands of a drunk driver out on state road 13 back on 10/22/97… and never did nothing. They sealed the grand jury on that."

Ada said she believes that her son's police paranoia started when he came back from the Vietnam War and found out hwo his dad killed while he was over seas.

While police say this is not Gary's first run in with the law, his cousin Cristina Vincent says her family is consulting with a lawyer because of how this bounty hunt went down.

According to Seargant Chad Hill, the Kosciusko County Prosecutor is reviewing this case  right now and we are waiting to see if charges will be filed against any of the parties involved.
Share this article: