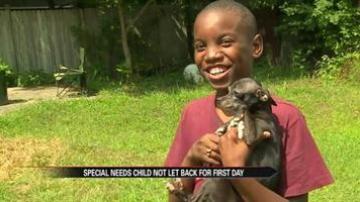 SOUTH BEND, Ind.--- Ar'mun Howard is 11 years old.  With Jordan high tops on his feet and "Hollister" sprawled across his chest, he was excited to go to school today. But instead of sitting in the classroom on the first day, he's at home holding the video game controller

"As a mother who has a child who is in special needs and stuff it’s like the system is not caring,” says Yuselfeian Howard, mother of son with special needs.”And I've been trying to reach out and do everything I can do as on my end of the bargain, but it’s like they [are] not caring."

Mom says her 5th grader should be attending class at Jackson Intermediate. It even says on the sign--- school starts today.

Last year Ar'mun was placed in the "home bound" program after some behavior outbursts caused him to need special attention and medication. The program was supposed to be temporary, and mom says he's improved since then, so she's ready for him to go back. Yet this morning when mom called she didn’t get an answer she liked.

“He told me that they didn't have no place for Ar'mun at Jackson, and that was the school he was supposed to go to,” said Howard.

Later in the afternoon, after I called the school district, an employee of the school called the parent and said Ar’mun could return to Jackson as a full-time special needs child.

"He's a very smart kid. Very smart. It's just wish that someone could really take the time to help me with him,” said Howard.

The mother says she hopes this year will be different, and her special needs child will get the attention he needs. She says the school district told her its working on getting him an assigned bus and they will compensate for the mileage she uses bringing him to school in the interim.
Share this article: