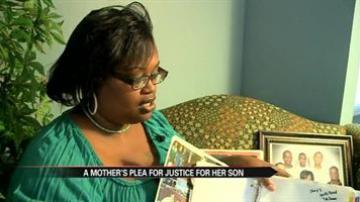 SOUTH BEND, Ind.-- Komaneach Wheeler is the mother of six. One is deceased, four live in her home, and one lives behind bars.

Her oldest son, Rayterrion Wheeler, was convicted of murdering 51-year-old Mack Caldwell of Mishawaka at a home on East Bowman Street in November of 2012.

Ever since that night, Wheeler has meticulously archived every facet of her son's case and every piece of evidence to prove his innocence.

“They didn't look at it from a kid's point of view,” said Wheeler. “We got somebody, He's going down and we're done. They did a sloppy investigation as far as the whole crime scene itself; nobody's story is the same, not even the investigators."

Wheeler says investigators told her the shooter was wearing a Chicago Bulls hat and blue jeans, and she says her son never wore baseball hats and was wearing Dickies that day. Her son insists he's innocent and says four men entered the home and shot Caldwell.

"And then my son says there was car that came in from the back. Well if you go back and look into the crime scene pictures, it rained that night so the ground was moist and you could see the tire prints dug off into the ground in her backyard that led out,” said Wheeler.

That's why Wheeler and her son, who will turn 18 this Saturday, recently filed an appeal. With the help of a public defender, she hopes he will get a retrial and she will get her life back.

"When it hits home or close to home it makes you look at things a whole lot different and it changes your outlook on things and it affects your life for the rest of your life until that piece is put back with the puzzle," said Wheeler.

As a single mother she's responsible for helping her other four children grapple with their brother’s 50 year sentence. She's relied on her church and Reverend Corey Gathright for support.

"I think it’s important that we understand that everything needs to have due process and if there's an opportunity to go back and revisit how this case unfolded and how it was investigated,” said Rev. Corey Gathright, president, Interdenominational Ministerial Alliance of St. Joseph County

So Wheeler will keep fighting for another trial and replaying that first conversation with her son in her head.