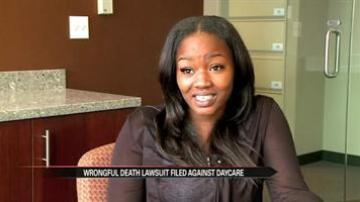 CHICAGO, Ill. -- Daycare is a place where children should feel safe-and looked after, but that's not what happened at a Michigan City daycare. Anita Leflore's 5-year-old son died after an accident on the playground at Tricia's Playhouse and Daycare, according to police. Now she wants others to learn from her tragedy.

Leflore's attorney just filed a wrongful death lawsuit against the daycare and its owner.

Leflore was living in a rough part of Chicago when she decided to move her family to Michigan City to make a better life.

Now she describes her life as a living hell.

"My five year old lost his life. I dropped him off at daycare. He was in perfect health. Nothing was wrong with him. And a few hours later I was told he was dead," said Leflore.

On June 9th, Williams got tangled in a jump rope tied to a piece of wood at the daycare's playground in the back yard. He accidentally hanged himself.

The coroner says he died of asphyxiation "due to a lack of supervision" and now Leflore wants answers.

"A lot of times we're like, oh yeah daycares they okay. You need for the daycare providers for the owners-the workers-we need to pay more attention. This is from lack of attention," said Leflore.

"Citations like failing to do proper background checks, failure to report evidence of child abuse, evidence of at least one child at the facility was dealt with inappropriately," said Novak.

They were also cited for a fire exit hazard and two staff members whose certifications for CPS were missing.

The state put the daycare on probation, but was that enough?

"There was responsibility we feel-given the serious nature of these violations for the state to have shut down this facility. Short of that-if it was going to be placed on probation-which it was-to notify parents who formed this sacred bond of trust with the daycare agency- leaving their children in their care," said Novak.

Now this mother is asking, 'What if?'

"Whatever we're doing it's not that important-we rush so much in life. What are we rushing for? Rushing for something like this to happen?" said Leflore.

"We would like to express our deepest condolences to the family. Because our investigation is still ongoing, we have no further comment."