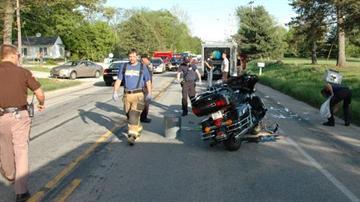 KOSCIUSKO COUNTY, Ind. -- A Syracuse man died Saturday from injuries he sustained in a motorcycle crash on Wednesday, May 21.

On May 21 around 6:30 p.m., the Kosciusko County Sheriff's Department responded to an accident on SR13 near the Southshore Golf Course.

According to the investigation, the driver of a Ford pickup truck pulling a trailer was stopped in the southbound lane of SR13 because of traffic.

The driver said that's when a motorcycle struck the trailer.

An ambulance was nearby and the paramedics witnessed the accident. They responded immediately and began to administer first aid to the driver of the motorcycle, 56-year-old Daniel List.

List was taken from the scene by helicopter to Lutheran Hospital in Fort Wayne.

On May 24, the Kosciusko County Sheriff's Department was notified List died from his injuries.