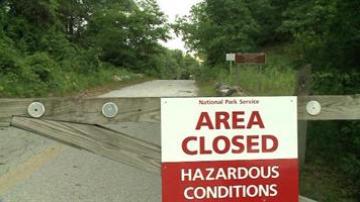 The National Park Service closed Mount Baldy that day and it will remain closed until scientists can better understand the potentially deadly terrain.

Officials and scientists have been conducting studies at Mount Baldy and recently discovered two more holes, similar to the one Nathan fell through.

They also found a number of depressions on one of the slopes.

"I would definitely say it’s a mystery, it’s nothing that has been seen by science before, while we have some theories as to what may have caused it, we certainly don’t pretend to know the answers yet," says Bruce Rowe, a supervisory Park Ranger with the Indiana Dunes.

The dunes are made up of grains of sand and should have no room for air.

Scientists are trying to figure out how he survived under the sand for four hours.

They also want to make sure it never happens again.

Some theories scientists have at this point are decaying trees underneath the sand, or human activity that led to erosion.

But they're still trying to figure it out.

"In August we have four specialists in geology, hydrology and decay that are coming out to do a variety of core samples on Mount Baldy and do some advanced ground penetration radar studies and try to learn about that underground internal architecture of Mount Baldy," said Rowe.

Until they do understand what is going on beneath the surface of the sand dunes, Mount Baldy will remain closed.

The rest of the Indiana Dunes National Lakeshore will remain open, officials just ask visitors to stay on designated trails.