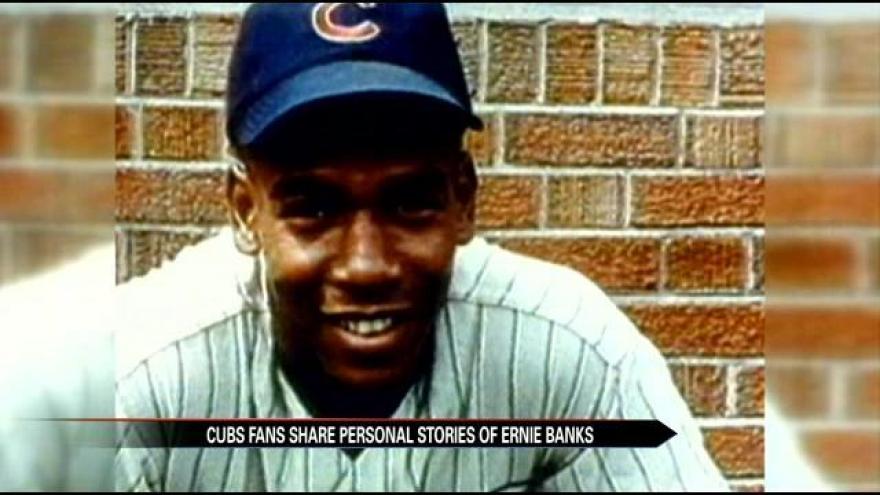 The next time Ernie Banks plays two -- something he enjoyed, feeling one baseball game a day wasn't enough -- it will be in the diamond in the sky.

It was a week shy of his 84th birthday.

A public memorial will be scheduled, Bogen said.

Cubs Chairman Tom Ricketts described Banks as "one of the greatest players of all time."

"Words cannot express how important Ernie Banks will always be to the Chicago Cubs, the city of Chicago and Major League Baseball," Ricketts said. "... He was a pioneer in the major leagues. And more importantly, he was the warmest and most sincere person I've ever known."

"Approachable, ever optimistic and kindhearted, Ernie Banks is and always will be Mr. Cub."

The thing is, Banks wasn't just a great baseball player, but a great champion for his sport and adopted city. The Windy City's mayor, Rahm Emanuel, called him "one of Chicago's greatest ambassadors."

Emanuel said, "He loved this city as much as he loved -- and lived for -- the game of baseball."

And baseball loved him back -- not just for the player he was, but the man he was.

This sentiment was evident on social media, with one man writing, "I've heard a lot of Ernie Banks stories in my life, a lot. But not one of them showed him in a negative way."

One person tweeted that, like the recently departed Stan Musial, Banks was "never too big for fans."

"Mr. Cub will play 2 today," wrote another man. "He's with the Angels now and hopefully he'll get a ring."

That message alluded to the fact that Banks, despite all his stellar play over his career, never earned a World Series ring. In fact, the last time the Cubs won baseball's ultimate prize was 1908.

But you'd never know it from Banks' omnipresent smile.

From the Negro Leagues to the Major League

He became the Chicago franchise's first black player in 1953. That happened three years after the Dallas native started his professional career in the Negro Leagues with the Kansas City Monarchs, then spent two years in the Army.

After the Monarchs sold his contract to the Cubs, Banks jumped straight to the Major Leagues -- hitting .314 in the 10 games he played in that first season.

He became Chicago's starting shortstop the next year, then had his real breakthrough in 1955 when he racked up 117 RBIs. His 44 home runs that season were at the time the most ever for a shortstop. (He hit 47 homers three years later, still a National League record for the position.)

Banks kept it up as his career rolled along.

Late umpire Tom Gorman once recalled that in 1957, pitchers Don Drysdale, Bob Purkey, Bob Friend and Jack Sanford knocked down Banks with pitches, according to a story on the Cubs' website.

"And each time he was knocked down," Gorman said, "Banks hit their next pitch out of the park."

The accomplishments piled up through Banks' retirement after the 1971 season: 2,583 hits, 11 National League All-Star selections, two of the league's Most Valuable Player awards, and 512 home runs, including five seasons hitting more than 40 homers.

And in 1977, six years after his last at-bat, Banks was inducted into the Baseball Hall of Fame.

Hall of Fame manager Leo Durocher, who was known for saying "Nice guys finish last," made an exception for Banks.

"Banks is one nice guy who finished first -- but he had the talent to go with it," Durocher said.

And this from sportswriter Arthur Daley: "He rejoices merely in living, and baseball is a marvelous extra that makes his existence so much more pleasurable."

Bogen, the family lawyer, said that Banks "would go right up to people and ask about their families and how they were doing rather than baseball."

"He wanted to know all about people's lives. Baseball was not the first thing he would talk about," the attorney said. "He cared about people."

His work on and off the field led to his receiving the Presidential Medal of Freedom, the nation's highest civilian honor, in 2013.

"To have this award passed on to me is certainly a great joy," Banks told CNN's Jake Tapper at the time. "It's something I'll never forget."

The slugger left an impression on President Barack Obama and first lady Michelle Obama, too.

In a White House statement Saturday, Obama noted how Banks -- who made $7 a day coming up through the Negro Leagues -- never lost "his cheer, his optimism, and his love of the game."

"He was beloved by baseball fans everywhere," Obama said, "including Michelle, who, when she was a girl, used to sit with her dad and watch him play on TV."

By Ed Payne and Greg Botelho