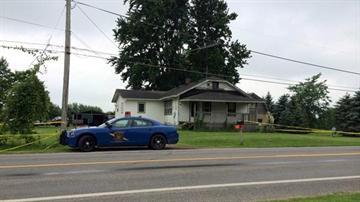 BERRIEN COUNTY, Mich. -- Michigan State Police said they are investigating what appears to be a murder-suicide near Stevensville.

Officers were dispatched at 6:13 a.m. Monday to the scene in the 400 block of W. John Beers Road in Royalton Township.

When they arrived, they found 41-year-old Delaina Tripp's body in the road.

Police said it appears her husband, David Tripp, shot Delaina, then went to the back of their home and shot himself.

"There was an altercation out in the roadway initially. We believe the shooting took place in the road way and then the male subject ran behind his residence and died of a self-inflicted gunshot wound," said Detective 1st Lieutenant Chuck Christensen of the Michigan State Police.

A car ran over Delaina's body, but the driver did not stop.

"We do have reports that the person that was left in the roadway was struck by a vehicle after being shot," said Lieutenant Melinda Logan of the Michigan State Police Niles Post.

Police believe the car is a 1998 -2002 Honda Accord. The color is not known. The vehicle will have undercarriage damage and will be missing the right front inner fender.

One neighbor said she heard it all unfold, but didn't realize what was going on until it was too late.

"I was lying in bed awake and I heard what I thought was two shots. Shortly thereafter I heard a car hitting something," said Leann Walton.

She got up to see what was going on.

"I got up to make sure my dogs hadn't been hit by a car, but there was no commotion out her so I went back in the house," said Walton.

She said she feels bad she didn't realize someone needed help.

"Had I heard arguing or had I heard somebody shout or scream when the shots went off, that would have been something else, but there was none of that. I didn't hear any of that," said Walton.

Sheriff Paul Bailey said they have been called out to the home once before for a domestic call.