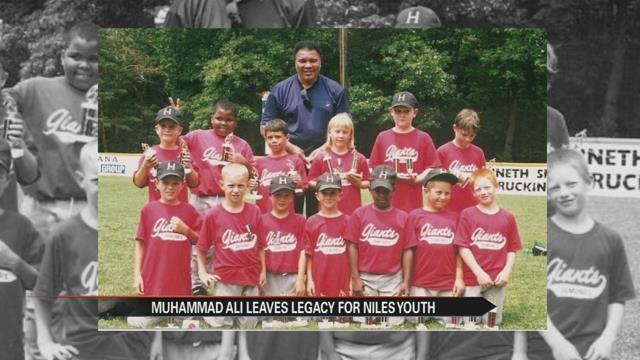 The late Muhammad Ali left a lasting impact in Niles where he and his wife Lonnie dedicated and helped build not one, but two baseball fields that helped the community and the lives of youngsters in Michiana.

Vota said the experience of meeting Muhammad Ali was humbling and that the impact he and his wife had in the community was genuine and touching.

"Very humbling to be around and yet so comfortable. They were people that reached out to anybody, I never saw either one of them ever not roll up their sleeves and get to work,” said Vota.

In 2006, of those fields, was the Niles high school baseball field. The field was renovated and dedicated by Muhammad Ali and his wife Lonnie.

“I remember his wife Lonnie selling hot dogs at opening day at Champs Field. I mean she’d roll up her sleeves and get in there with everybody else,” said Vota.

Ali's son, Assad played on those fields even taking the first pitch from his father at the opening of Champs field.

“When his dad would come around and watch their games everyone would be so excited and so enamored with him just being there. They were just a part of our daily lives and our community. They were such contributors,” said Vota.

The total cost of the renovations totaling nearly 150,000 dollars and all made possible through donations by the Ali family and the Detroit Tigers.

From local little leaguers to high school athletes, Ali made an impact on the Niles community.

“Just seeing him being, just being around kids you know like I said he had time for everybody and it’s just amazing. It’s someone that isn’t just at the national level, this guy’s impacted communities,” said Vota.

And fittingly on Saturday, the Niles baseball team, many of the same players who met Ali and his wife, were down in the 5th inning but came back to defeat Edwardsburg to win the district title with a walk off hit in the bottom of the 7th inning, 9 - 8.

Vota said they spoke of Ali and his words throughout the game.