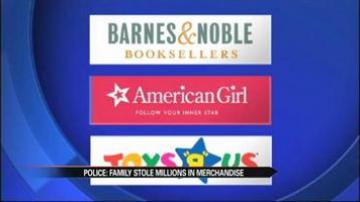 The Bogdanov family, including two parents in their 50s and their daughter, were arrested and charged with stealing more than $7-million in merchandise from major stores like Toys R Us, Barnes and Noble, and American Girl.

Feds say a gust of wind outside a Texas store revealed stolen items hidden in compartments underneath the wife's big skirt.

"It appears she had a dress that was fashioned with an inside compartment to secret merchandise up to the size of a pretty good box," said Secret Service Agent Frank Benedetto.

Police say they believe the shop lifting went on for more than a decade and they were able to track them down through eBay accounts.

If convicted, they each could spend 10 years in prison.