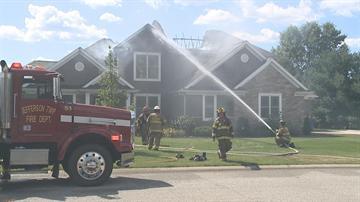 JEFFERSON TOWNSHIP, Ind. – An air conditioning unit may be to blame for sparking a fire that destroyed most of a house on the 57000-block of El Dorado Drive on Friday afternoon.

Fire fighters were called to the scene at around 3:30 p.m. after a neighbor saw flames shooting out of the back of the house.  Thankfully nobody was inside the home when the fire broke out.

“It had come through the roof prior to our arrival, flames were through the roof,” described Assistant Chief Greg Swank of the Jefferson Township Fire Department.  “Just getting it under control, that’s my biggest fear, the wind feeding it, fanning it, access to getting into it, there’s challenges with this type of structure of a house that makes it difficult to get in there and stop the fire.”

Parts of the roof eventually collapsed into the house.  Concord and Elkhart Township Fire provided mutual aid to bring in enough water to get the flames under control.

Two fire fighters were treated for minor smoke inhalation, but nobody was seriously injured in the fire.  However, there was a scare for one of the family pets.

“The homeowner said there was a cat that was inside, I did have a witness that said they saw the cat jump off the stairs and run into a back bedroom and then that back bedroom had a broken door,” Swank explained.  “I’m assuming the cat got out, we couldn’t find it in the house.”

The homeowner later told ABC57 the cat had been found alive hiding in the laundry room of the home.

The cause of the fire had yet to be conclusively determined, but Chief Swank said it appeared that an electrical short from the air conditioning unit on the back of the house may be to blame.