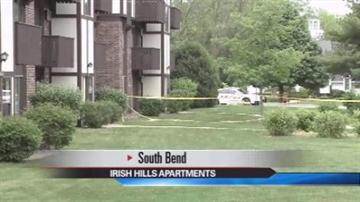 The last time police responded to 4252 Irish Hills Drive Apt. 1B was Sunday morning when several 911 calls came in.

She fled the apartment, he locked the door, then began stabbing his daughter, Shirley Mundia, according to police.

Police shot and killed Mwaura at the scene.

Shirley died from her wounds at the hospital.

Records at the South Bend Police Department show police have responded to the Irish Hills apartment at least four times before Sunday's incident.

The first time Lucy called for help was on December 2, 2012.

The next day she called 911 reporting harassment. On both dates police responded, but no arrests were made.

On December 17, 2012, a personal protection order for Lucy was issued against Mwaura it expired on June 1st, one day after the deadly attack.

On May 30, 2013 Lucy called for help again, frightened that her husband was violating that personal protection order.

Lucy's family says that’s when Mwaura threatened to kill Lucy and their six-year-old daughter via a text message.

According to police, Mwaura was arrested that Thursday. Jail records show he was booked at 7:26 a.m. but he was released at 1:38 p.m. and no charges were filed.

On May 31st at 10 a.m., Capt. Phil Trent, South Bend Police Department's Spokesperson said Lucy called 911 reporting someone was trying to break into her apartment.

Through the St. Joseph County Superior Court Small Claims Division, ABC 57 found that another protection order was issued for Lucy on September 14, 2012 but it was dismissed on October 1, 2012 when neither party showed up for a court hearing.At that time court paperwork lists Mwuara as living in Bremen.

Stephanie McFarland, a spokesperson for the Department of Child Services (DCS) said DCS has had prior contact with the family some time ago, however she said federal and state laws prohibit them for commenting on any other information regarding specifics. McFarland said it wasn’t years ago, but it wasn’t recently either.

St. Joseph County Prosecutor Mike Dvorak told ABC 57 News late this afternoon via phone that he and his office along with the Metro Homicide Unit are extremely busy compiling all of the data from all of the past cases and cannot take a time out to answer our questions on specifics, such as why Mwaura was released from jail.

The court chronological case summary listed in St. Joseph County Superior Court 3 on May 31, 2013 documentation states the case on Mwaura was opened as a new filing.

However in the charges column entered into the system it states, "No charge applicable" and a date of May 30, 2013 is entered.

An employee in the clerks office told ABC 57 even when the prosecutor's office dismisses charges the original charges still appear on the case summary document. However on Mwaura's case summary document no charges appear, although the SBPD public information bulletin shows on May 30, 2013 Mwaura was arrested at Lucy's apartment, and the County Jail records show he was booked on one count of invasion of privacy for violating the protective order.

They went on to say ll reports related to the individuals and incident of May 30th remain under review by our office. When that review is completed, you will be advised.

ABC 57 Called Lt. Young to find out if this specific case was assigned to one of his detectives and what deputy prosecutor closed out the case determining no charges were applicable. However Lt. Young did not return our call.