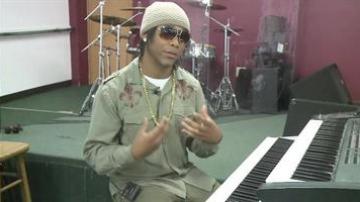 SOUTH BEND, Ind. -- On a Saturday night in July, Michael Gillam was shot and killed at a business on N. Olive Street. Michael Taylor has been charged in his murder. Gillams' son spoke about how he is dealing with his father's murder.

Brian Gillam not only lost his father to violence, his mother was also murdered.

“You may not know, my mother was tragically killed by violence, it wasn’t due to a gun but it was violence and my father was killed to gun violence so it definitely has tragically impacted my life," said Brian.

He was just 15-years-old when it happened. He says he has used music to help him cope.

“Dealing with loss is never easy nor is dealing with death, but whenever I feel sad or when I feel like I’m not strong, and I’m feeling weak, I just think about the bible and what it says. It says the race is not given to the strong nor the swift but it given to he who endureth to the end. And so those words of God really comfort my heart," said Brian.

Brian says he has no harsh feelings towards the people who murdered his parents.

Instead, he chooses to focus on the beauty of his music as a way to honor their memory.

Brian volunteers his time teaching young children how to play the piano.

On Saturday, his students will play in a public concert to honor the lives that were taken too soon.

“We could be here one day and gone the next, so we have to cherish life. With all that it brings, it brings good things, it brings bad things, even in the bad things you have to enjoy and cope with it because eventually your life is going to be over," said Brian.

The concert will be held at Kingdom Christian Center at 6 p.m. Saturday.