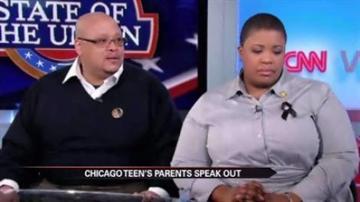 Parents of the 15-year-old girl who was shot and killed in Chicago are speaking out.

They say congress needs to do more when it comes to gun violence.

Last night they were at the State of the Union as the First Lady's guests.

They say, although it is unlikely Congress will pass an assault weapons ban, something needs to be done.

"The only thing that I could possibly say is I know we need assault weapons because we have an Army, but how are they getting on our streets? That's what I would like to know," said Nathaniel Pendleton, father of Hadiya Pendleton.

The teen was shot and killed last month while at a park with friends.

Police arrested two men in connection with her death.