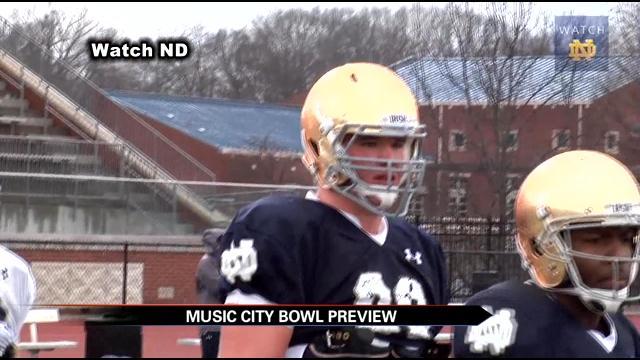 Tuesday, the Fighting Irish will play their final game of the season against the LSU Tigers in the Music City Bowl in Nashville, Tennessee.

“I get to play some of my favorite opponents from when I was at Florida and I'm just glad I am able to finish against an SEC school,” Irish cornerback Cody Riggs said.

A win Tuesday, could wrap up a roller coaster season for the Irish.

“There's a sense of urgency in wanting to win a football game because you want to stem the tide a little bit, you want to think about the really good things that happened this year with this football team, you don't want to be hearing the negative things,” Kelly said.

And a win could set the tone for next year.

“This is an important game for us to go into the off-season,” Kelly said.

LSU's defense managed to hold its opponents to 134 points all season, an average of 11 points per game.

“We're ready to fight and we're ready to prove ourselves as a tough unit up front," Irish offensive lineman Mike McGlinchey said.

Notre Dame has eight full practices in Music City under their belts.

And the Irish say with their preparation, they are ready to prove they can compete with the 23 rd ranked Tigers.

We've had some ups and downs this year but we're a good, solid group and we're ready to prove that against LSU,” McGlinchey said.

Notre Dame is 7-5 on this year's regular season.

Kick off for Tuesday's bowl game is set for 3 p.m. ET at LP Field in Nashville.