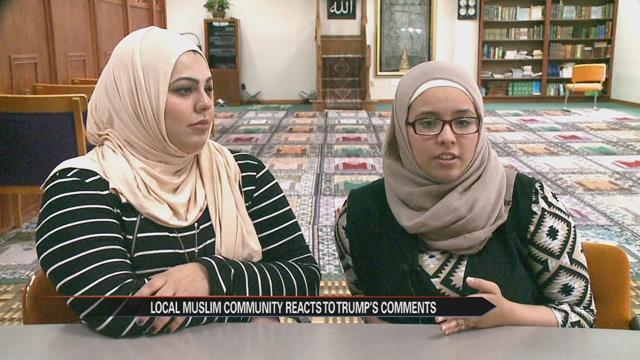 Muslims in Michiana reacted to Donald Trump’s proposal to ban all Muslims from entering the United States.

“People are not looking at you just as an American, typical kid,” Mohammad Sirajuddin, of the Islamic Society of Michiana, said. “They are looking at you as, you know, a Muslim.”

That’s what Sirajuddin said he is teaching his students in religion class at the South Bend mosque.

Sirajuddin said because his students are Muslim, they will be viewed differently.

“[The students] get frustrated and they feel that they are, their faith is being isolated,” Sirajuddin said.

“Donald J. Trump is calling for a total and complete shutdown of Muslims entering the United States until our country’s representatives can figure out what the hell is going on,” Trump said at a rally.

Samantha Musleh and Reem Hassaen are members of the mosque in South Bend.

They said Trump’s proposed ban is an insult to proud Americans like them.

“Whatever he’s saying is a lie,” Musleh said. “I am 100-percent not what he says that Muslims are.”

Musleh is a mother of four girls under the age of nine.

She said she’s becoming more afraid that her children will grow up in a country where their faith places a target on them.

“Every parent worries but I seem to feel like I have to worry more because my children are going to be growing up Muslim,” Musleh said.

Hassaen said America should be a place where people of all religions should not fear openly practicing their faith.

“I think that everybody who believes in anything should not be afraid to stand and say, ‘I believe in it’,” Hassaen said.

Sirajuddin said some people fail to realize that most Muslims around the world are not terrorists or extremists, but every day people.

“They are just trying to live life like everybody else,” Sirajuddin said.

Sirajuddin, Hassaen and Musleh said they encourage anyone who is curious about Islam or Muslim people to stop by the mosque and ask questions.

They are hoping education will help take away any fear people may have.