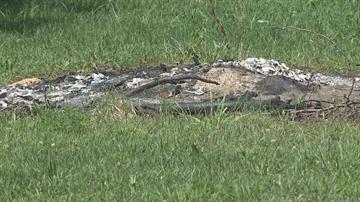 BARODA, Mich. – The cause of a mystery blast in Berrien County Saturday night was solved Tuesday.

According to Baroda-Lake Township Police Chief Gary Ruhl, the explosion was caused by dynamite set off in a field by a man with federal explosive permits.

“I was sitting here doing these dishes late at night and then I heard this ka-boom,” recalled 76-year-old Mildred Klug of Baroda. Klug told ABC 57 News she was shocked by the blast. “It’s kind of scary,” she said. “(I was) wondering what (was) going on at that time of night when it’s dark out.”

“It was louder than thunder, it sounded like an explosion,” said 79-year-old Ruth Retzke who lives near the explosion site on Gardner Road in Baroda. “I thought somebody’s house exploded.”

According to Ruhl three sticks of dynamite were set off on a farm on the corner of Gardner Road and Browntown Road.  The owner of the property showed officers permits from the ATF and claimed he was testing explosives. The man was planning to build a pond.

Ruhl said because the man was licensed and Baroda Township doesn’t have a noise ordinance there were no rules broken.

People near the blast wondered Tuesday why, even if the explosions were legal, the man chose to shoot them off at night. “If it’s in the middle of the night I don’t think it’s too good of an idea,” said Retzke.

“Notify the people around you you’re going to be doing something,” said Klug.

The Berrien County Sheriff’s Department took the official report Saturday night and said the validity of the man’s permits is being checked by state officials. Police withheld the name of the man Tuesday.

ABC 57 News was unable to contact the man with explosives permits at his home Tuesday.