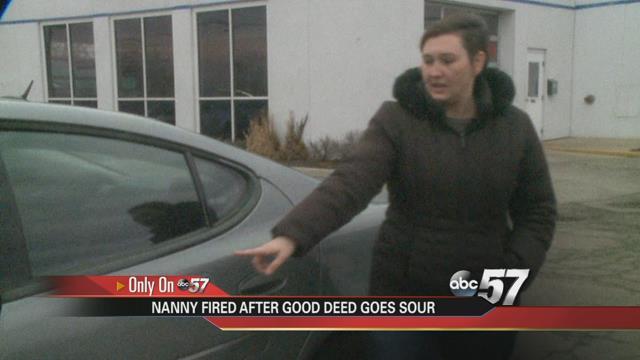 For six months, a South Bend woman worked a secure job as a nanny for an 8-month-old child but it took one good deed to erase it all.

36- year-old Kristin Elkington says she loved the little guy she watched for several months but last Thursday proved to be the final time, she’d take care of him.

On Thursday morning, Elkington was watching the 8-month-old baby but around 10 a.m. that morning she heard a knock on the door that would change everything.

Four teenage boys needed help jumping their car, a car that Elkington tells ABC 57 was also stolen and after she tried fixing the problem, they came back again asking for a place to wait for their ride.

She agreed to let them in but the second she turned her back, her car was stolen by the same people she tried to help.

The parents of the 8-month-old child she had been entrusted to take care of had no choice, she says, but to fire her.

“As heartbroken as I am, I do feel that was probably the consequence I deserved for what I did. I’m angry at myself, and I’m angry at those kids but I’m not angry at the people I worked for at all. They have to do what they have to do to protect their family and I completely understand that,” said Elkington.