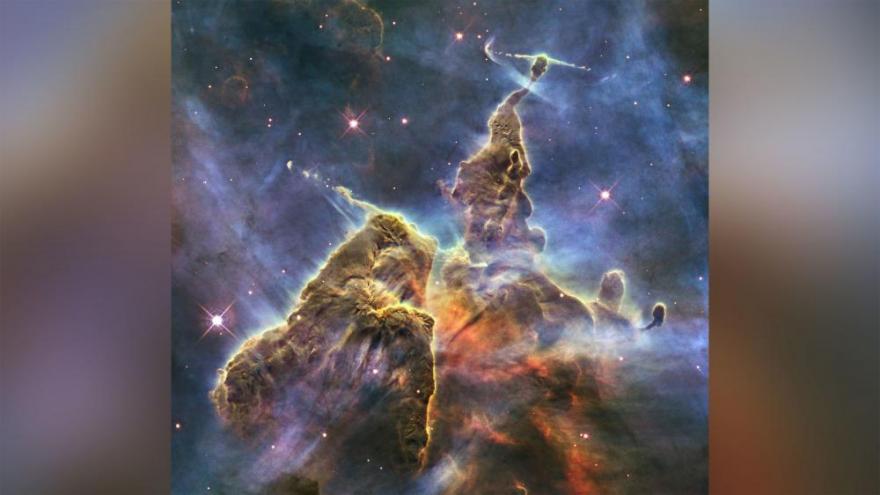 NASA's Hubble Space Telescope captures the chaotic activity atop a three-light-year-tall pillar of gas and dust that is being eaten away by the brilliant light from nearby bright stars in a tempestuous stellar nursery called the Carina Nebula.

(CNN) -- NASA is celebrating the Hubble Space Telescope's 30th year in orbit, and even though most of the celebrations have been canceled due to the coronavirus pandemic, you can still explore some of its amazing contributions online.

The Hubble was the first major optical telescope to be placed in space and has been showing us incredible photos of the universe 24 hours a day, seven days a week since April 1990.

As part of the celebrations, NASA launched a place for you to see a picture of the cosmos on your birthday. All you have to do is select your birthday month and day and the generator will reveal a photo from its collection.

NASA had events scheduled in California and Washington, D.C., but has postponed them for a later date.

If you have a telescope NASA explains how you can see some of the same objects the Hubble has during this month, from your backyard.

"On a clear night, find a safe location with a dark sky away from bright lights, point your telescope upward, and gaze upon some of the same nebulas and galaxies Hubble has viewed," NASA's directions say. If you don't have a telescope, binoculars and smaller telescopes may allow you to see a few of the same objects.

And if that doesn't give you enough to look at, on its social media channels NASA is sharing one photo every day from each of Hubble's years in orbit to countdown to the official anniversary on April 24.