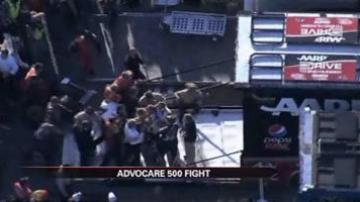 PHOENIX, Ariz. -- An incident in NASCAR led to an all out brawl.

Jeff Gordon felt wronged in an earlier bumping incident with Clint Bowyer so Gordon waited on Bowyer and retaliated.  Gordon caused Bowyer to spin out, taking out several other drivers along with him.

Bowyer's crew was not happy and went after Gordon which led to a free for all.

Then once Bowyer got to pit lane, he made a beeline for Gordon's hauler to try to get a piece of the action.

Eventually everyone was separated and order was restored.