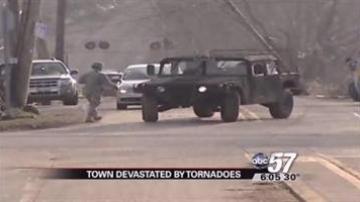 HENRYVILLE, Ind. -- Families in southern Indiana are still assessing the damage from a series of deadly tornadoes!

The powerful storm unleashed more than 40 twisters on Friday across 10 states!

At least 39 people were been killed. Dozens more were injured.

Two of those tornadoes hit Henryville with winds up to 200 miles per hour!

Several homes, businesses, and even schools were destroyed.

"We've been through a lot. Everything. More than anyone can imagine,” said Justin Henley who lost friends in the tornado.

"I know we have to go forward, and wherever that road takes, we'll soon find out,” said Maureen Williams, a tornado survivor.

The National Guard has been deployed.