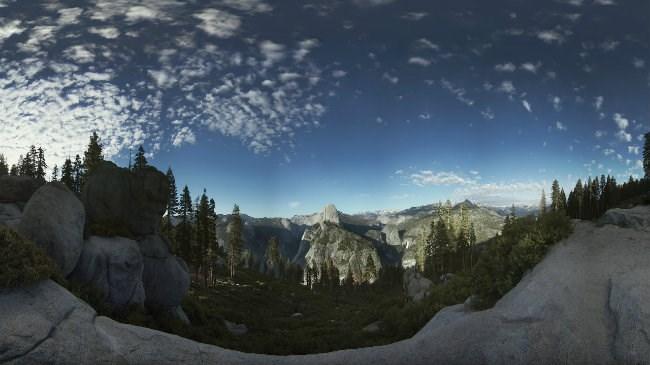 WASHINGTON (CNNMoney) -- Getting close to the president can be near impossible for the average person.

Yet a new short film from National Geographic and Oculus is changing that. Thursday the companies released "Through the Ages: President Obama celebrates America's National Parks," an 11-minute recap of the first family's visit to Yosemite National Park over Father's Day weekend.

The release of the film coincides with the 100-year anniversary of the National Park Service. The experience is available for free on Oculus Rift, Samsung Gear VR and Facebook 360.

Anyone with a virtual reality headset can feel like they're only inches away from President Obama. I watched an early screening of the film and found myself so close to virtual Obama in one scene that I could almost read his wristwatch.

"There is this real sense of proximity and intimacy that I believe is very precious and unique," said Felix Lajeunesse, cofounder of Felix & Paul Studios, which created the film.

It includes striking views of Yosemite landmarks such as El Capitan, the Cathedral Rocks, Mariposa Grove and Yosemite Falls. While the experience can't compare to being at Yosemite in person, it's about as close as you can get without buying a plane ticket to California.

As Obama's helicopter lands in a field, viewers find themselves at eye level with tall blades of grass that gyrate due to the wind from Marine One's blades. Later, viewers sit in a canoe that is paddled down the serene Merced River.

In another scene, viewers are on press row -- perhaps 10 feet from Obama -- as he gives a speech at the park. Felix & Paul also spent hours at some of Yosemite's vistas to record timelapse videos, in which the clouds race across the sky.

"This is really about awareness of our national parks and conservation," said Rajiv Mody, vice president of social media at National Geographic. "We think [virtual reality] is a great medium for us to reach people and tell even better stories."