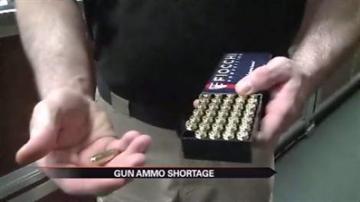 We called around to several police departments and gun shops in Indiana and Michigan and many of them told us their ammo is on backorder.

“I went to Cabela’s and I got the bush master that they had. They get them in at eight a.m. and they are gone by noon. There is no where you can get it,” said Glenn Davis.

Davis could not find a store with ammo in Michigan, so he drove down to Indiana’s Midwest Gun Exchange to pick up some rounds.

“I was able to find some down here,” said Davis.

But Midwest Gun Exchange Manager Brad Rupert says they too are having some backorder issues.

He says there are certain types of ammo he ordered a year ago that he still has not received.

“With state and local agencies buying ammunition and the high consumer demand, there just is not enough to meet all the demand in the marketplace,” said Rupert.

While the shortage is affecting business for local gun shops, Rupert says several police departments are getting desperate.

“Right now, we see a lot of smaller police departments that have resorted to paying retail prices for ammunition, because they cannot get it through their suppliers,” said Rupert.

Davis says he does not mind traveling a bit to pick up rounds to use for his home protection, but police in his home state struggling to stay supplied worries him.

“That is nerve racking right there, because they are the first responders right.  If we cannot protect ourselves in our homes, because of the shortage and the police cannot, that was our back-up.  They will not be able to.