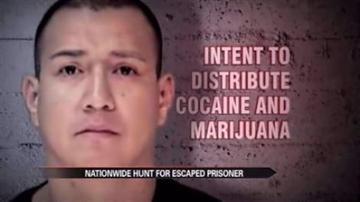 A nationwide hunt for an escaped criminal continues.

We now know more about how the man got out from behind bars, twice!

34-year-old Rocky Delgado Marquez walked out of jail in Phoenix by switching identity bracelets with another inmate schedule for release.

Marquez made his way to Detroit, where authorities eventually found him with an AK 47. His escape plan worked so well the first time, officers said he broke out again.

"He's smarter than your average criminal. He is somehow getting inmates to cooperate with him to use their identities to walk out of jail," said Frederick J. Freeman, the Deputy US Marshal.

He is still on the run and faces federal charges including intent to distribute drugs.