Nationwide Law Enforcement are on alert 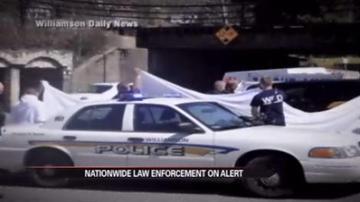 Police say the two might be connected to law enforcement killings and a white supremacist group.

It's the latest in a disturbing rash of attacks on law enforcement officials nationwide.

Just this week a West Virginia sheriff was gunned down in his car.  Last week a district attorney and his wife in Texas were murdered in their home.

Authorities now think the suspects in those cases might be associates of the suspect who murdered the Colorado prison chief.

"When high profile crimes are committed there's a tendency for people to want to copy them," said Brad Garrett, ABC news consultant.

The 37 year old suspect in the West Virginia shooting is in critical condition following a gun battle with officers.