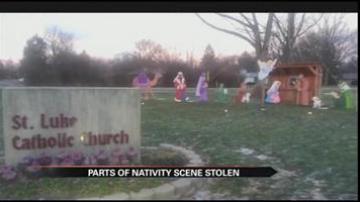 INDIANAPOLIS -- A church in Indianapolis is without its nativity scene.

Police say two people stole a couple of wooden figures including a lamb and then led police on a high speed chase through town.

The pursuit did not last long but once both of them were arrested police say the woman was intoxicated while driving and she had a .12 BAC.

Both people are behind bars.