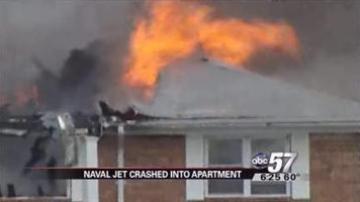 The naval jet hit the buildings early on Friday, shaking the ground and sparking a large fire.

People went running from the scene.

The two-person crew ejected before impact.

One of the nearby residents found one of the crewmen.

"He was in shock, still strapped to his seat. We just picked him up and we dragged him to the other side of the parking lot away from the fire until rescue could get on the scene," said Pat Kavanaugh, who found the crew member.

Rescuers said a number of residents helped them try and tackle the fire and search for possible survivors.

At least six people, including the two pilots, have been taken to local hospitals.

There is no word yet on any deaths from the crash.