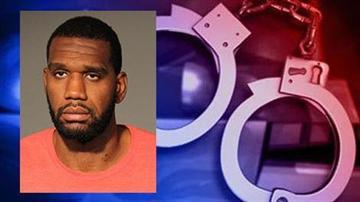 According to the police report, the Lawrence Police Department was called to a disturbance on Maple Bluff Place.

The victim was lying on the sofa and had blood on her face, a swollen nose and cuts on her forehead and nose.

A witness told police, "He punched her in the face."

The victim refused medical treatment and said she fell, but couldn't say where or when.

Oden told police "things got out of control" and he started going after the victim. He was held back, but says as he swung his arms to move them away, he punched the victim in the face.

Oden said he and the victim dated for two years but had broken up two months ago.

Oden was taken into custody.

He is facing two counts of battery.