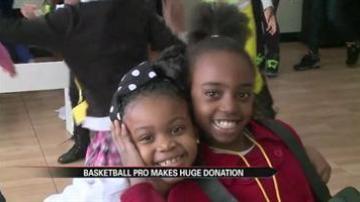 BENTON HARBOR, Mich.-- Hundreds of kids showed up to the Boys and Girls Club in Benton Harbor to celebrate Christmas Eve, and they received a special surprise from a pro-athlete.

Wilson Chandler said, “It means everything to me. Like I said, the city helped raise me and I’m grateful that.”

Chandler is a forward for the Denver Nuggets, but for many in Benton Harbor, he's just the guy who spent his childhood playing hoops at the Boys and Girls Club.

Chandler said, “It’s basically the same as when I was growing up. There’s not much to do. So hopefully I can inspire someone to do something.”

Chandler says basketball changed his life, and he believes it can do the same for other kids in the city.

Jayden Viverette said he loves coming to the Boys and Girls Club like Chandler did .

Viverette said, “You get to play basketball, you get to ride scooters! Hulahoop! You get to go in areas and play games!”

The kids were all smiles as Chandler handed them a Christmas present.

Chandler said, “I don’t want to do it for the publicity or anything like that. I just want to give back to the community that helped raise me. I like coming home and giving back to the kids and see a smile on their face and just know that I can help.”

His generosity is something the director of the organization is very thankful for.

Liji Hanny said, “He’s doing something nice for a bunch of kids who love him and he’s showing them that he loves them back.”