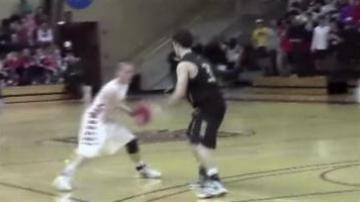 GRINNELL, Iowa. -- Tuesday night, the NCAA single basketball scoring record was shattered and not by a big school and not in a major conference game.

It was done by Jack Taylor, a sophomore at Grinnel College in Iowa.

Taylor said he knew he was on fire when he hit seven consecutive three pointers but said it was his team that really stepped up for him.

"At halftime when I had 58 they wanted to get me the ball in the 2nd half and see if I could keep it going and so I'm lucky to have the teammates that I have they were very unselfish tonight," said Taylor.

He broke the record by 25 points and now we're learning his moves left NBA players stunned.

The NBA record for points scored is 100 and it is held by Wilt Chamberlin.