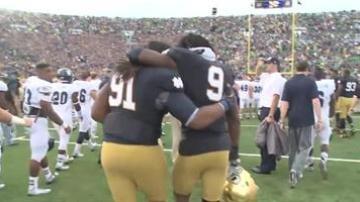 NOTRE DAME, Ind.-- Head Coach Brian Kelly said earlier this week he would like to see his secondary improve communication before Saturday's game against Michigan, especially now that safety Austin Collinsworth is out with a shoulder injury.

The Irish are looking to make history this week against Michigan.

“They’re an awesome team, they’ve got a lot of great players, they have great, great scheme, a lot of things that guys can see from your last game, so they have a lot of ways that they can hurt you," Irish linebacker Joe Schmidt said.

They're hoping to put one of college football's greatest rivalries to rest.

“Gardner is a great player and they have a lot of explosive players on the team and their o-line is playing very well this year, so we’ll definitely look closely at the film and try to diagnose what they do well,” Day said.

After losing safety and team captain Austin Collinsworth to a shoulder injury last week, the Irish secondary is looking for leadership.

And to shut down a fast-paced Wolverine offense that rolled up 350 yards in its game last week against Appalachian State. With a dual-threat quarterback that completed 13 of 14 passes for 173 yards and three touchdowns.

“They present a lot, obviously great receivers, obviously good quarterback, we’re just trying to take it as a team, as a whole, looking at all the small things, all the big things,” Luke said.

Both teams are coming off of a win in their season opener. Notre Dame over Rice and Michigan over Appalachian State.