ND Fans bundle up for Blue and Gold game 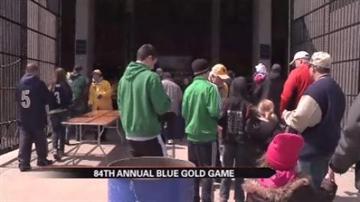 The Irish haven't played at home since November.

Fans bundled up and braved the cold to get their first glimpse of what they hope will be another successful football season.

At this time last year, it was in the mid-50s outside for the spring game. Despite this year's crisp temps, Saturday's crowd cheered as it was announced that there was no snow on the radar.