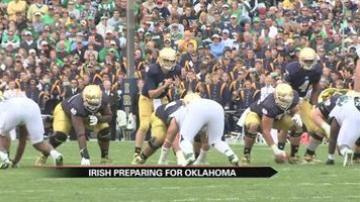 NOTRE DAME, Ind.-- Kick-off is less than 48 hours away for the Fighting Irish, who will take on number 14 ranked Oklahoma at Notre Dame Stadium this weekend.

Notre Dame is ranked 94th in the nation in rushing yards, on the ground they are only picking up 133 yards per game. Head Coach Brian Kelly believes if that improves, it will be key to rattling that Sooner defense.

“I think our guys are very aware of our weaknesses and what we have to improve on to win this football game,” Kelly said.

Kelly thinks the balance is there, but the team is just not using it consistently.

However, when they have needed to run the ball, they have.

“We’ve run some football games late, Purdue in particular, where we’ve been able to run the ball to finish out the game,” Kelly said.

On average, Oklahoma allows no more than 100 rushing yards per game. So, in order to rattle their defense, the Irish are going to have to get off to a fast start and find that balance early in the first quarter.

“We’re not where we want to be to in terms of running the ball effectively throughout the game, which is going to allow us the kind of run-pass balance, the ability to keep people off-balance that we need,” Kelly said.

In order to defeat Oklahoma this weekend, Kelly says the Irish can't play like they have been, showing up in the second half to put points on the board.

Oklahoma has won only one game against Notre Dame in series history, and that was in 1956.