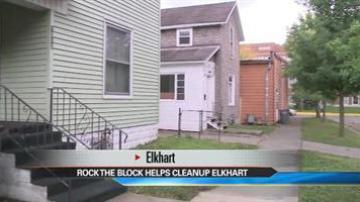 ELKHART, Ind. -- Saturday, the rain did not stop nearly a hundred people who took to the streets of Elkhart to clean up twenty-four homes. The event was called Rock the Block and was organized by La Casa.

People of all ages came out to take part in the massive clean-up movement.

"There was even an 80 year old woman running around with lemonade on her walker and a battery powered leaf blower, she was giving every body refreshments and blowing leafs off the sidewalks," said Jason Moreno, Community Organizer La Casa Inc.

Together the group cleared two blocks and several alleyways in Elkhart.

"There's probably areas in the alleys that we regained five feet of the alley back after clearing it out,” explained Moreno.

They even pulled out their saws and cut down about sixty trees that were fire hazards because they were leaning against homes or getting tangled in electrical wires.

Moreno says the fun is just beginning, next weekend, La Casa is looking for volunteers to help paint the store fronts of businesses on Indiana Avenue.