Nearly a dozen burglaries in two months, a small east side neighborhood targeted 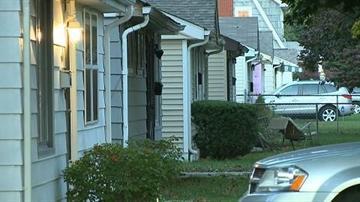 SOUTH BEND, Ind. – It was purely by chance that a young man walked in on a burglary at his own home, Tuesday morning. A change in his daily routine brought him face to face with the thief who didn't’t expect the man to come home so soon.

Normally when Tarek Araman leaves his home in the morning, he doesn't’t come back for a few hours. He has to drop his sister off at school then get to class at IUSB.

But when he decided to return home to change his clothes before heading to class Tuesday, he through a monkey-wrench into a criminal’s best laid plans.

When he pulled up to the house, he saw his bedroom light on and didn't’t recall leaving it on. As he entered the home he saw a man standing in the hallway.

At first he thought he was imagining things, but then the figure started to slowly walk away. That’s when Araman says he questioned what he was seeing by exclaiming, “What?”

The figure froze for a moment before Araman realized someone was actually burglarizing his house. That’s when he started to approach the thief.

Araman says, they fought in his living room briefly before the thief ran out the back door. Araman followed, tackling him in the backyard.

Outside, Araman was yelling for his neighbor to help him. His neighbor says, she heard the screaming and checked the front yard first. Seeing no one, she headed for the back door.

Meanwhile, Araman and the thief fought in the yard, wrestling around on the grass. Eventually, the bigger man escaped from Araman and kicked him in the stomach before jumping a fence and disappearing from view.

A few moments later, police and Araman’s neighbor arrived on the scene but could not locate the intruder. But a search of the area turned up several interesting things.

Apparently, the thief intentionally moved the mat in front of the back door so he wouldn’t trip on it. He also propped the door open so he could go in and out quickly and easily.

Perhaps the most disturbing thing of all, was evidence that someone had been sitting around watching and waiting for the residents of Araman’s home to leave for the day.

Behind Araman’s home, a chain-linked fence lined with shrubbery and plants makes a natural privacy wall. But it is also provided someone with enough cover to case the home and several others on the block.

Araman’s house is not the first to be burglarized on Sunnymeade Avenue. Nearly a dozen homes on that street and Jefferson Boulevard have been hit in the last two months.

Some neighbors recall being outside and hearing whistling around the time when the burglaries occurred. They believe it’s the way a group of thieves are communicating before the heists to signal the home is clear of occupants.

It took Araman 12 minutes to drive his sister, Sarah, to school and return home. In that time, the man broke in through the back door and had already slipped Araman’s laptop into his pants. The computer was recovered a short distance from where the thief disappeared from.

On the other side of the privacy fence, Meeka Randles’ home has been burglarized twice since July.

The first time, her six-year-old son actually saw the intruders face when the family returned home briefly between seeing fireworks displays. The boy said something at the time, but the family did not realize what he was talking about until they returned home later that night to find their stuff was taken.

Like Araman’s home, the second time Meeka Randles’ home was burglarized, the thieves were in and out in a matter of minutes. Meeka’s pitbull had been hit by a car just a week earlier and in hindsight the family realizes the dog was trying to warn them that someone was behind their home.

In light of the break-ins Randles has decided to purchase a handgun and a license to carry it. She has also purchased a security system. She says, the price she pays to protect her home is far less then what it cost her to replace the stolen items, and her peace of mind.

Now, Araman’s family and many others in the neighborhood surrounding Sunnymeade Avenue are searching for that same peace of mind. “We don’t want to be robbed anymore. It’s not right and we want to come together and figure out a way to stop these people,” said Sarah Araman.

According to police, it is a bad idea to confront someone burglarizing your home. They warn that you have no idea what the crook is capable of, or if they are armed with a weapon. The police say, it is far easier to replace your stuff than it is to replace your life.

Instead they would prefer it if you stay hidden, dial 911 and get a solid description of the intruder, while waiting for a patrol to arrive. Meanwhile, police continue to investigate the burglaries on South Bend’s east side.