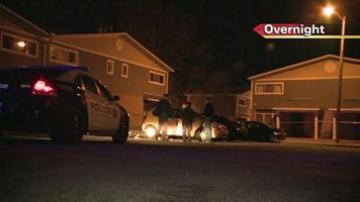 ELKHART, Ind. -- Elkhart Police were called to Indiana Avenue where they found a man in his twenties shot in a parking lot of Washington Garden Apartments.  Police say they found a gun and a bag with drugs on the ground.

Neighbors who live near where Friday night's shooting took place, said this is not uncommon for this neighborhood, and because of that they remain frightened everyday.

Scared. That is the only word 15-year old Krystal Jibbons can use to describe how she feels living in this Elkhart neighborhood.

Friday night's shooting in the parking lot at Washington Garden Apartments has now put Jibbons and other neighbors more on edge.

“I was too scared to leave the apartment so I just stayed inside,” says Jibbons.

The shooting happened a block away on West Indiana Avenue.

“We heard gunshots, he heard people running back there, and he thought he heard someone yelling for help so I called 9-1-1 and there were some people running,” says Elkhart resident Christina Turnbo.

Turnbo says hearing gunshots is starting to become a way of life in this neighborhood.

Now after another shooting right in her backyard, she is not sure anything will be enough to make her feel safe.

“I feel like I need a bunker under an ocean, not very safe,” says Turnbo.

ABC 57 did reach out to Elkhart Police on Saturday but they were unable to release information.

The victim was sent to Memorial Hospital, but his condition is unknown.