Neighbors afraid to live next to Co-Op. 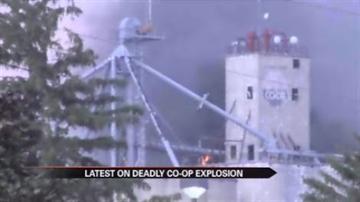 UNION MILLS, Ind. –Residents of Union Mills who live near the co-op are worried about their safety. On Monday and employee was killed in an explosion and Tuesday there was a fire in a silo.

As if Monday’s explosion wasn’t enough of a scare for neighbors living next to this co-op, Tuesday, the third silo caught fire.

“I could see the flames and I thought this is really serious,” said Linda Wiseman.

“Before we knew it we saw smoke coming out of the silo,” said a neighbor.

Co-alliance says they were trying to remove part of the silo that was unstable and air got trapped inside erupting in flames.

Officials were so worried about another explosion, they cleared out the neighborhood.

“He said ma’am get ready to evacuate,” said Wiseman.

“An officer come up and said we would like you to evacuate,” said Jon Bernacchi.

Luckily volunteer fire crews put out Tuesday’s fire quickly, but on Monday, a co-op employee was killed by an explosion.

Neighbors are wondering if they are safe living next to the co-op.

“I’ve always known there was a danger; any kind of farm and grain involved period,” said Wiseman.

They want Co-alliance to make sure this never happens again.

“I want them to comply with the safety laws,” said Wiseman.

The Co-alliance safety and risk manager said on Thursday they will be putting out some hot spots in the silo and then they will be able to assess whether it can be repaired or will have to be rebuilt entirely.