Neighbors: City of South Bend has neglected waterfall on the Northwest side 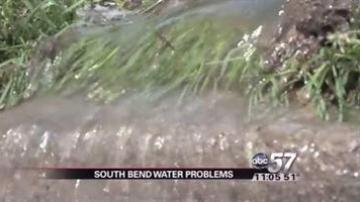 SOUTH BEND, Ind. -- Holy waterfall!  That's what neighbors on North Brookfield Street in South Bend are saying about a water leak that has flooded their street!

They said it's been leaking gallons and gallons of water since Thursday and the city still hasn't fixed it.

Talk about soggy situation that just doesn't stop. Neighbors on Brookfield Street cannot believe the city is wasting this much water.

"How many gallons is this pumping out an hour that somebody is paying for," said neighbor Jeanne Hales.

"The money spent not fixing this could have been spent on something else," said neighbor Dave Polnski.

Neighbors say this old pipe has been spewing water since last Thursday.  They want to know why the city hasn’t fixed the problem yet."You see that running and running. You don't let the water run in your faucet all day," said Polnski.

The people who live in the home behind the leak are experiencing very low water pressure.  They say they have called the city several times but were told the leak is not a priority, because they have 10 other leaks in the city that need to get fixed first.

I called water works with the city and was told the leak had been assessed, which neighbors say is partly true.

"They came out looked it poked a stick down there and then just left," said Hales.

The city also told me it has contracted L & S Plumbing to handle the leak.

This is the voice-mail the homeowner got from the plumber on Monday.

"It is impossible for me to fix the leak today," said L and S Plumbing.

Neighbors here said they think the city is taking its own sweet time with the leak because of this area of town isn't considered one of the better neighborhoods.