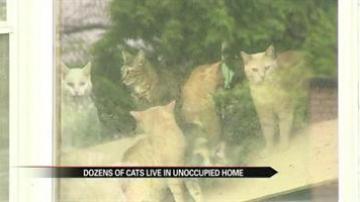 SYRACUSE, Ind. -- Residents on Mill Street in Syracuse are concerned about a house that has been abandoned for the last year and is full of cats. Now police and the health department are getting involved.

One resident who knows the owner says he went inside the house last fall and it was in horrible condition.

He said there were no litter boxes and there was a cat inside that died while giving birth.

"The smell was, you couldn’t be in it for more than 10 seconds and you’d start to get sick," said the neighbor who did not want to be identified.

There were ten cats in the window on Wednesday, but neighbors say there are probably more than that inside.

"It's hard telling how many animals are in there dead in the corners or under things and its hard telling what they are eating," said neighbor Gary Kyle.

Neighbors say it has been at least a year since someone lived in the house.

They say someone stops by every once in a while, but not nearly often enough.

"We don’t see anybody over there. We saw somebody there for the first time in about a week yesterday. Somebody needs to take care of them cats because that’s, that’s unbelievable that she's let them cats sit in there like that," said Kyle.

On days when the temperature climbs up to the 80s, neighbors worry about the cats and the environment they live in.

"Up until about 2 or 3 days ago the smell was so bad you could walk by on the sidewalk and smell the animals. It's bad," said Kyle.

Neighbors are worried. They say either the owner needs to clean up and move in to take care of the animals, or the animals need to be rescued.

The Syracuse Police Department and Kosciusko County Health Department are working with the family that owns the house.

They’ve given the family deadlines to get the cats vaccinated and get the house in order.

We tracked down the family's phone number and called multiple times. We're waiting to hear back.