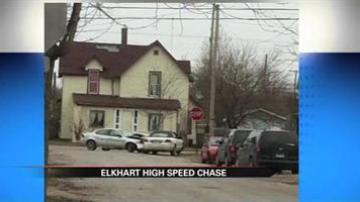 ELKHART, Ind.-- Sunday morning a suspect failed to pull over on Indiana Avenue, and led police on a chase down several alleys in Elkhart. The pursuit ended when the suspect crashed into another car, and ran away.

Melissa Kleitz said, “I heard the screeching tires and I heard a big crash. I walked outside and I didn't see anything, so I walk around the corner, and there were two cars on top of each other. Cops were everywhere. They were on every side street going up and down looking for people.”

Kleitz lives near Noble and Main Street where the crash happened.

Kleitz was upset that the chase happened so close to home.

Kleitz said, “There’s been numerous people flying through the stop signs, there’s been more than one car chase here. Not too long after we moved in somebody robbed a bank and the car chase went down our alley. It’s pretty bad.”

Kleitz and her neighbor Debbie Fay said this isn’t the first high speed chase through their neighborhood.

Debbie Fay said, “After living here for so many years it’s kind of sad, but I’m getting used to it.”