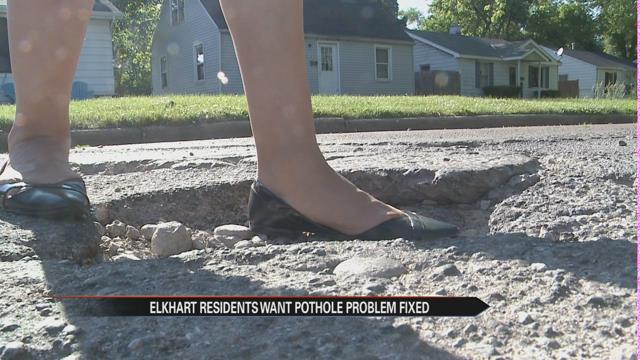 After an $800,000 appropriation to mill and pave 39 areas in the city of Elkhart, one neighborhood is left questioning, “what happened to us?”

The city of Elkhart's summer paving schedule has begun and will continue until the middle of September.

The street department says the list was decided by the Street Commissioner and the Mayor but a neighborhood in Elkhart wants to get on that list. They say they have dealt with major street problems for years.

“I've been here pretty much five years and it just seems like the past two years have kind of been hit and miss with the road crews getting out here,” says Keith Reedy.

Reedy, a resident on Stevens Avenue in Elkhart, says his road is broken up. There are pot holes as deep as your ankles throughout his block but Reedy says that's not the worst of it.

“You can actually see how big of a diameter it is and if someone is just coming down through here and you are not really expecting it – and if you are moving fast you are not going to see this,” says Reedy.

Reedy show an enormous patch that was filled by the Elkhart Street Department but Reedy says he doesn't think this is the last of his pothole problems.

“It's not really a long term fix because basically after a while it just kind of breaks up and pot holes show up again,” says Reedy.

Neighbor, Amy Gilbert, who has lived on the street for almost 30 years, says this is a recurring issue.

“They don't really get repaired in the proper way. I don't know if it's cheap materials because they do not last,” says Gilbert.

While homeowners says they are grateful for temporary patching, being a part of the 2015 milling and paving list would be better.

“We aren't really too far from the downtown area it would be nice if they actually come through and pay a little bit more attention or even possibly repave it,” says Reedy.

At-large councilman Brian Dickerson says it is possible to get a crew out to do more than just patch up pot holes. Dickerson says contacting him can help get a more permanent solution for the roads in your neighborhood.
Share this article: