Neighbors of men arrested after cockfighting investigation speak out 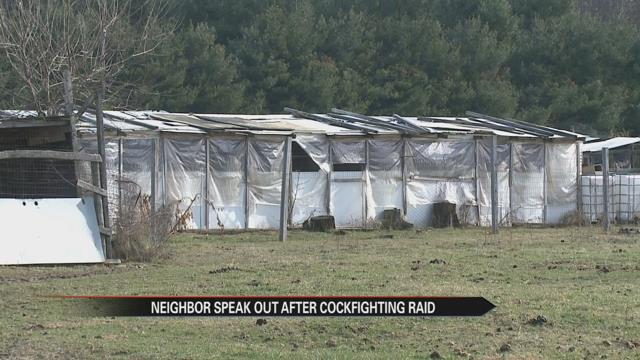 Neighbors of two of the men arrested Saturday in a cockfighting raid in Bristol are speaking out.

Police raided a home in Bristol, at 21852 State Line Road, and in Bremen, at 6244 Plymouth-Goshen Trail, Saturday evening after completing a weeks-long investigation.

In Bristol, Victor Rosales and Dario Marin-Alvarez were arrested.

Their neighbors said the raid was completely unexpected.

“I think it’s an overkill,” neighbor Stephen Pearson said. “Everything – it was way too much.”

Pearson witnessed dozens of local, state and federal authorities swarming the home across the street from him Saturday night.

Police arrested Rosales and Marin-Alvarez for their alleged roles in a cockfighting trade.

“I think it’s unfair because I think [Rosales] has turned his life around,” neighbor Sarah Nelson said. “I think he is trying.”

Neighbors who have known Rosales for the last eight years said when he first moved in, they did suspect something was going on.

Pearson said he asked Rosales point blank why he had a couple hundred roosters on his property when he moved in.

“I asked him, ‘why were [the roosters] here?’,” Pearson said. “And [Rosales] says, ‘I raise them. I sell them with hens so people can have good roosters with their stock.’”

Despite becoming friends with Rosales, Nelson also said she believed cockfighting was going on when he first moved in next door to her.

“I do believe they were fighting roosters then,” Nelson said. “But that was a long time ago and I think they realized that that was not a good idea.”

“It was not confirmed that cockfighting was taking place at either location but in fact the birds were being raised at the two locations for a fighting purpose,” Indiana State Police Sgt. Trent Smith said in an email.

He added, “Investigators found the spurs that are attached to the roosters prior to the fights.”

Still, Pearson said he could not imagine his neighbor engaging in cockfighting.

“You couldn’t have a better neighbor,” Pearson said.

Indiana State Police said the amount of officers involved in both raids was decided after completing the investigation.

Our reporting partners at the Elkhart Truth found that Rosales and Marin-Alvarez were also arrested on cockfighting charges in Ohio in 2014.