Neighbors on edge after shooting outside of Rick's Mart 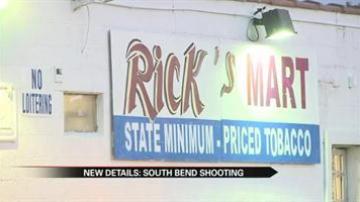 SOUTH BEND, Ind. --Neighbors are on edge after a 27-year-old South Bend man was shot outside of Rick’s Mart on the corner of Kenmore Street and West Western Avenue around seven Saturday night.

Police say the shooting started as a fight outside of Rick’s Mart and escalated.

Hester Nelson says she was not sure what was going on at Rick’s Mart on West Western Avenue when she turned on Kenmore Street on her drive home.

“I seen the police had that taped off so I assumed that something had happened over at the munchie mart,” said Nelson.

What she found out from her neighbors was frightening.

“A shooting or something was happening down there at the store,” said Nelson.

Officers say it started with a fight outside of Rick’s Mart around seven Saturday night and ended with 27-year-old James Carter being shot and rushed to Memorial Hospital.

Police say Rick’s Mart is known to have crime surrounding the business.

Back in July the convenience store wanted to expand the business and put in two gas pumps and a larger parking lot, but the common council voted that expansion down due to alleged illegal activity just outside of the store.

Annie McBroom says the violence around the store is giving the rest of her neighborhood a bad reputation.

“Well there has to be a problem because we have had no trick or treaters in like three years,” said McBroom.

Neighbors say they do see police patrolling in the area occasionally, but they want them to step up their presence, especially around the store where a lot of young people hang out.

“I’d like to see the police patrol the area more because we are having too much violence in this area,” said Nelson.

Police currently have no suspects in this shooting but do have several leads and they do not believe it is gang related.

Carter is in serious condition at the hospital.