Neighbors react to the shooting of 7-year-old Kristyana Jackson 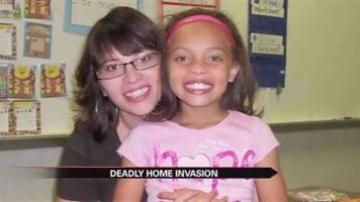 ELKHART, Ind.-- As of Monday night, Elkhart Police were still searching for the people who shot and killed 7-year-old Kristyana Jackson on Friday night.

Police say Kristyana was shot during an apparent home invasion. She was transported to Memorial Hospital where she died Sunday afternoon. Her father, John Jackson, was also shot, but was treated and released.

The Jackson family began making funeral arrangements for Kristyana. But, the questions on neighbors’ minds are still, who are these suspects and when will they be caught.

“There is no reason a child should be shot at 7-years-old anywhere in this world for any reason at all,” said the Jackson’s neighbor, Iverson Grove.

It’s been almost 3 days since gunfire woke the quiet Elkhart neighborhood, but the shock remains.

“We’re puzzled by the whole event it was senseless,” said Grove. “There didn’t seem to be any reason for it. It made no sense to us.”

Grove lives across the street from the Jackson family home where 7-year-old kristyana was shot and killed in what police are calling an apparent home invasion.

“We did ask the father if he recognized them,” said Grove.  “He did not. He had no idea who did this or why.”

But right now, police can’t say whether this tragic crime was a random act of violence.

“Well, the case is currently still under investigation,” said Tim Balyeat, the Assistant Police Chief for Elkhart. “We’re talking to people and running down leads. That’s about all I can tell you at this point because we don’t want to contaminate anything that’s going on.”

Random or not, Grove says neighbors are like family and they won’t be intimidated.

“This neighborhood is not afraid of a violent crime,” said Grove. “We stand together with our people with our neighbors. We don’t hide behind our blinds. We will confront evil when it appears and we will prevail.”

Neighbors gathered with friends and family on Monday night for a vigil to honor Kristyana. Students and staff from Mary Daly elementary school were also expected to attend.  The school principal released this statement on Monday: “Our prayers for peace go out to the Jackson family. Kristyana was a wonderful little girl from a great family. She will be remembered as a student that brought joy to others here at Mary Daly.”